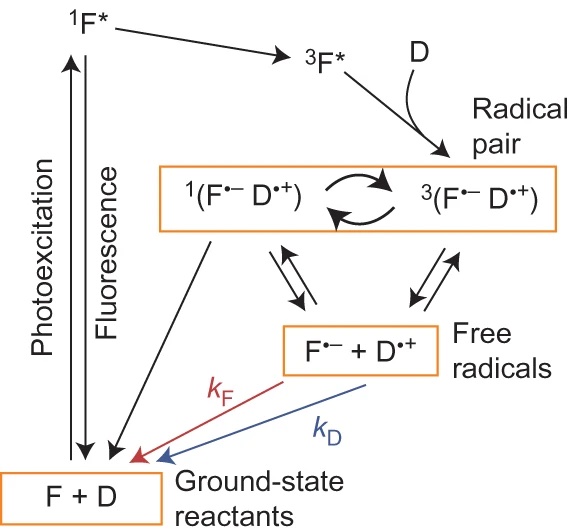 Reaction scheme for the intermolecular photochemical reaction of a flavin (F) with an electron donor (D).

Magnetic fields as weak as the Earth’s can change the yields of radical pair reactions even though the energies involved are orders of magnitude smaller than the thermal energy, kBT, at room temperature. Proposed as the source of the light-dependent magnetic compass in migratory birds, the radical pair mechanism is thought to operate in cryptochrome flavoproteins in the retina. Here we demonstrate that the primary magnetic field effect on flavin photoreactions can be amplified chemically by slow radical termination reactions under conditions of continuous photoexcitation. The nature and origin of the amplification are revealed by studies of the intermolecular flavin–tryptophan and flavin–ascorbic acid photocycles and the closely related intramolecular flavin–tryptophan radical pair in cryptochrome. Amplification factors of up to 5.6 were observed for magnetic fields weaker than 1 mT. Substantial chemical amplification could have a significant impact on the viability of a cryptochrome-based magnetic compass sensor.