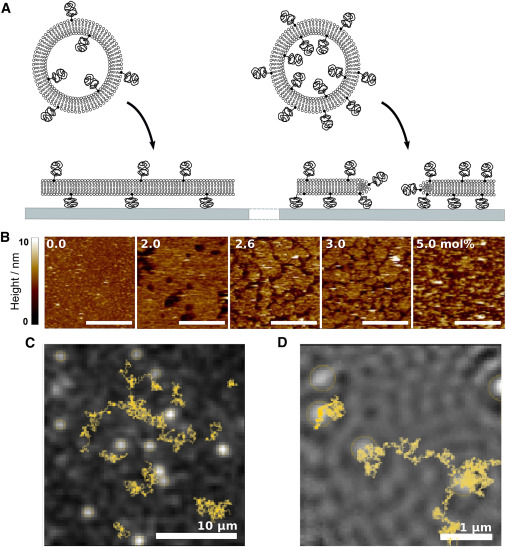 As the mole fraction of PEGylated lipids increases, defects form in the bilayer that act as obstacles, generating anomalous diffusion. Diffusion in cell membranes is not just simple two-dimensional Brownian motion but typically depends on the timescale of the observation. The physical origins of this anomalous subdiffusion are unresolved, and model systems capable of quantitative and reproducible control of membrane diffusion have been recognized as a key experimental bottleneck. Here, we control anomalous diffusion using supported lipid bilayers containing lipids derivatized with polyethylene glycol (PEG) headgroups. Bilayers with specific excluded area fractions are formed by control of PEG lipid mole fraction. These bilayers exhibit a switch in diffusive behavior, becoming anomalous as bilayer continuity is disrupted. Using a combination of single-molecule fluorescence and interferometric imaging, we measure the anomalous behavior in this model over four orders of magnitude in time. Diffusion in these bilayers is well described by a power-law dependence of the mean-square displacement with observation time. Anomaleity in this system can be tailored by simply controlling the mole fraction of PEG lipid, producing bilayers with diffusion parameters similar to those observed for anomalous diffusion in biological membranes.