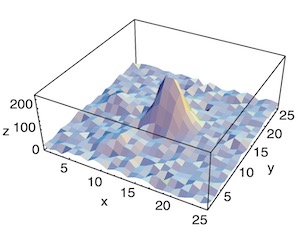 The movement produced by a small number of myosin molecular motors was measured with nanometre precision using single-molecule fluorescence localisation methods. The positional precision of the measurements was sufficient to reveal fluctuations in sliding velocity due to stochastic interactions between individual myosin motors and the actin filament. Dependence of sliding velocity upon filament length was measured and fluctuations in velocity were quantified by autocorrelation analysis. Optical tweezers-based nanometry was used to measure the myosin-1b step-size directly. The 10 nm power-stroke and its duty cycle ratio were consistent with values derived from in vitro sliding assays.